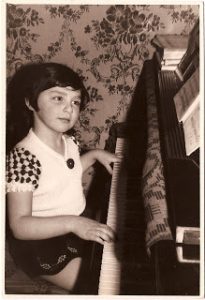 When I was a girl in Russia, my father, Alexander Stromberg, was a stone carver who specialized in Cameos. During the seventies Soviet Union communist regime, having an independent business was illegal, and my father’s workshop was on a large ledge of our kitchen window.

His official job was being a violinist at the Moscow Symphony Orchestra, and no one could suspect that the beautifully detailed carved cameo earrings adorning the female conductor’s ears were the creation of one of her violinists.

The stones my father used were displayed on a high shelf of our living room shelves, which I would climb endlessly to rearrange the colorful gemstone collection.

At the age of five, my father taught me how to polish Amber, and there were books of beautiful Faberge Jewelry around our house.

I recall my childhood in Russia as a wonderful time, filled with good memories. I was attending a school that specialized in music in addition to regular studies, and although I distinctly remember wanting to study the harp, the instrument chosen for me was the piano. During the frozen Moscow winters, there was ice skating, riding the sleigh in the snow, and of course making snowmen.

I also remember spending hours playing with play-dough and attending sculpture classes. In the building we lived in, downstairs, there was a store with an art supplies department, my favorite thing in the world! Any time I could manage to convince any adult family member to take me shopping there was great joy. In between shopping, I would just stop by to browse for my next buy. 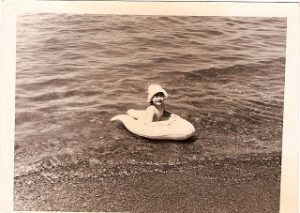 During the summers, the whole family would spend weeks in a village in the countryside, my grandparents would join us, and this was heaps of fun — swimming in the pond, and picking wild raspberries and miniature strawberries that were growing on the side of the paths everywhere.

It must have been that in those days, in Russian society, boys were given more liberties, and as a result, I was a major tomboy. I had my mother cut my hair short, and my proudest moments were when someone mistook me for a boy. I loved to run, climb fences and was always the “general” when we played “war” in the public playground. I was always the last kid to go home in the evenings. 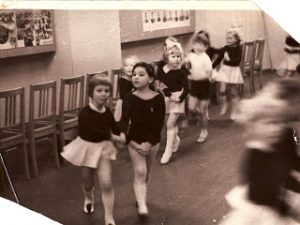 With the one neighborhood best girlfriend, I made “secrets,” holes we dug in the ground and in which we buried all kinds of “treasures” — a collection of found knickknacks which we covered with grass and dirt. When we removed the dirt, there were little windows of the collage which we’d created. Of course, only we knew where they were buried, and would go visit them. We also would go to the local junkyard and collect old discarded shoes, and clean them up and play “shop” and try to sell them to the passers-by.

Life was full of adventures, fun activities, art, sports, friends, and dodging grandparents, as I was the first grandchild in the entire family.